On 15 June, the Iberian singularity mechanism came into effect allowing Spain and Portugal to contain price rises in their electricity markets by applying a cap on the price of gas used for thermal power generation. Until December 2022, this gas price cap will be 40 €/MWh and will increase by 5 €/MWh per month until it reaches 70 €/MWh in May 2023.

As we shall see and analyse in this report, the mechanism has proven effective in containing the wholesale price of electricity (spot price) by imposing a more stable and moderate price on electricity produced by CCGTs – the technology that normally sets the marginal market price. 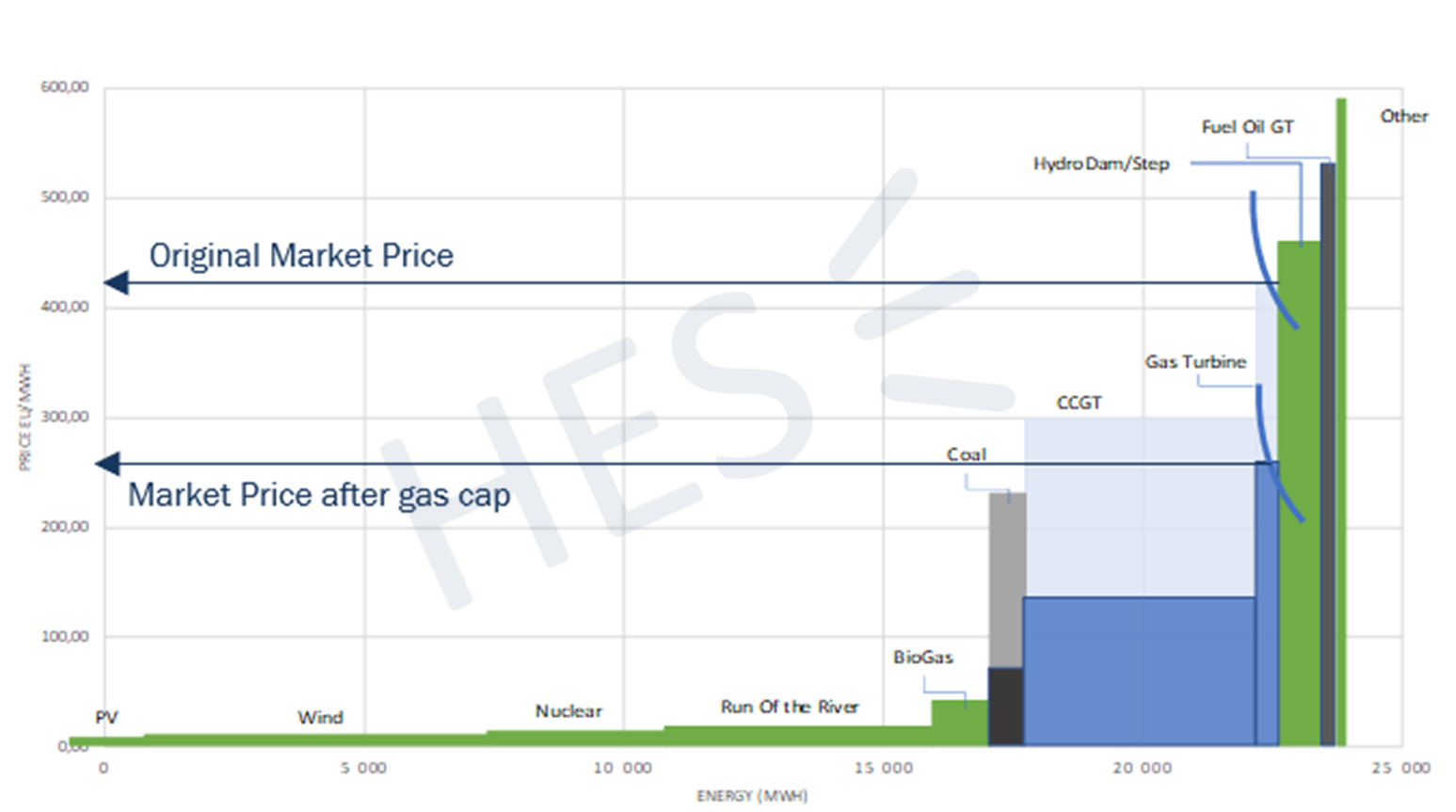 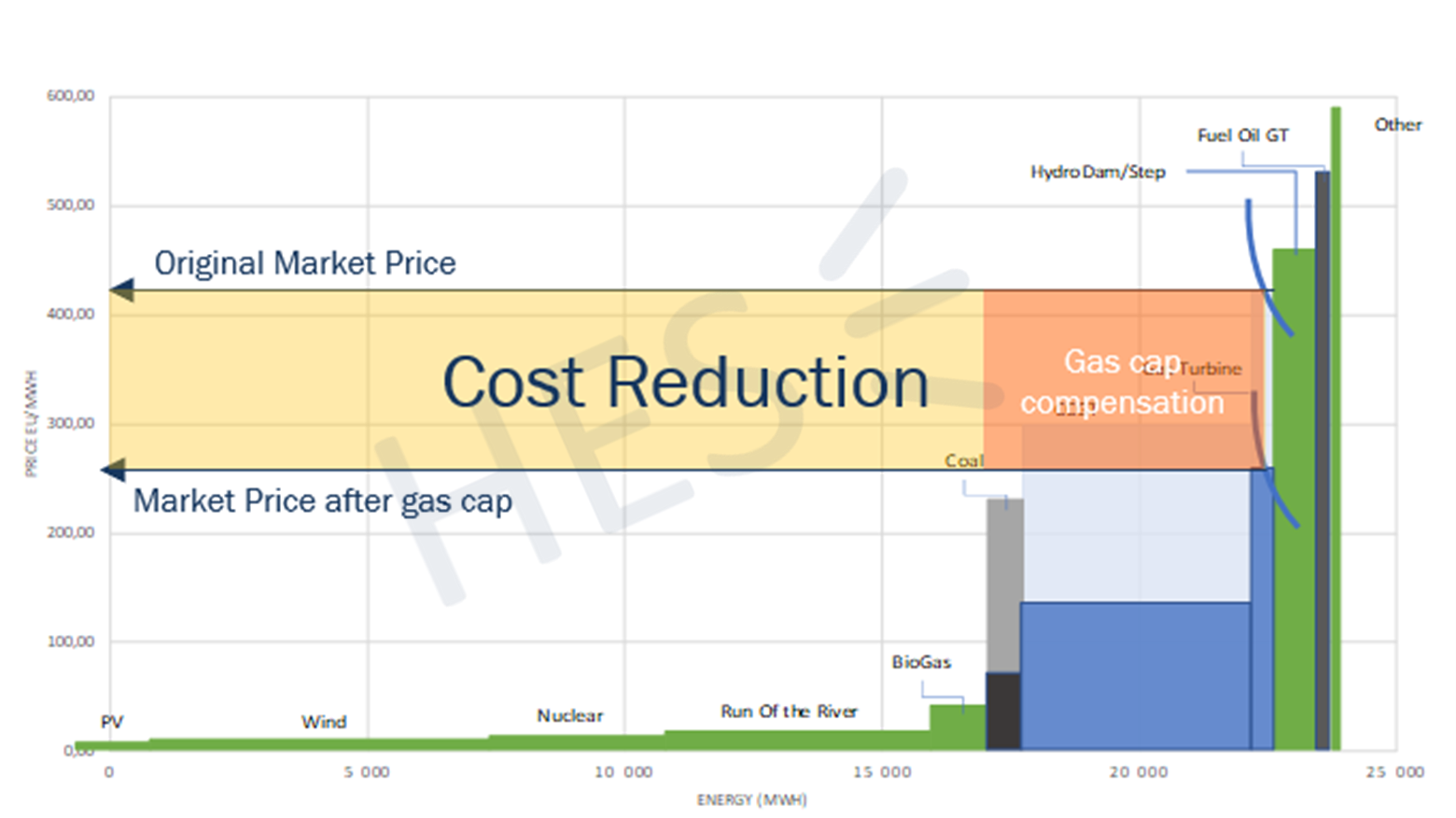 Paradoxically, although the regulator imposes a limit on the price of gas, this does not mean that the evolution of the gas price stops affecting consumers. The Royal Decree [10/2022 of 13 May establishing a temporary production cost adjustment mechanism to reduce the price of electricity on the wholesale market] establishes that final consumers must compensate thermal generators (“cost of adjustment”) for this gas cap. The compensation will ultimately depend on two factors: (i) the amount of energy generated by the subsidised thermal generation and (ii) the price of gas on the spot market.

Unfortunately, and ever since the measure came into force, circumstances have worked against it: i) wind and hydro power generation have fallen significantly due to weather conditions, thus leading to an increase in CCGTs generation; and ii) MIBGAS gas prices started to rise sharply to well above 200 €/MWh. These two dynamics have been persistent during the summer months: in July and August, CCGTs accounted for an average 29% of the electricity generation mix (against an average 11% registered in May), and the average gas price was 74% higher than in May.

In short, although during July and August the spot price moved consistently around the 140 €/MWh mark – 22% below the average price in May –, the compensation reached an average of 135 €/MWh, which meant that the resulting price for consumers was eventually 26% higher than the average of May.

At first sight, the final result is rather discouraging, as August has set an all-time high price. But it is taking the analysis further before concluding that the new regulation is ineffective. To do this, we should not compare current prices against historical ones, but rather against those that would have resulted had the gas cap not been applied.

In these first months, the average price has been around 140 €/MWh which, added to the compensation, amounts to around 275 €/MWh. Without the gas cap, it would have been around 328 €/MWh. In other words, this summer the gas cap has helped to moderate the price by 50-60 €/MWh on average thanks to the fact that the gas cap prevents the impact of gas from spreading to other energies.

Even though the mechanism has proven to reduce the price of the final electricity bill, there are still many doubts and controversies surrounding it. Above all, with regards to the transparency of the calculation of this adjustment cost in the actual electricity bills. For contracts indexed to the wholesale market, retailers decide on the degree of detail they want to show. For regulated contracts, the price only includes a provisional value of OMIE (Operator of the Iberian Energy Market) that includes the adjustment cost. On the other hand, although the mechanism does not change the merit order of generation (thermal power plants are still more expensive than nuclear or renewables), it does alter the final price. As France does not apply the same gas cap, the price of electricity is cheaper in Spain than in France. The immediate effect is an increase in exports to France (subsidised by the Spanish consumer) while thermal production in Spain increases.

A more encouraging future. The measure will be in force until May 2023, and it is expected that in winter and spring, when wind and hydro power generation are higher, the number of CCGTs to be compensated will be lower and, therefore, the cost of compensation will be lower, too.

Comparison with other mechanisms implemented in other EU Member States

This gas cap mechanism implemented in the Iberian Peninsula is clearly a market intervention, with the resulting price distortion. It has been made possible thanks to Peninsula´s energy isolation from the rest of Europe (with interconnections of less than 3%), hence the famous “Iberian singularity”. However, in order to implement a similar mechanism on the continental plate, all European countries would have to reach an agreement, and this will not be achieved immediately. Especially considering that most of our EU partners are very attached to market mechanisms that send a clear price signal to the consumer (if the price of gas is expensive, austerity measures will be more natural).

However, even the most liberal countries have not hesitated to publish measures to mitigate the impact of price rises on the end customer (For more details, see HES article: “Rising energy prices: national measures to protect European end-users”). These measures can be grouped into:

As we have already mentioned, although this set of measures and subsidies have helped to alleviate the energy crisis one way or another, it has been the mechanism of the gas cap in the Iberian system that has had the greatest impact on market prices in Spain and Portugal. The graph below shows a comparison between German and French market prices on the one hand, and Spanish wholesale prices on the other, plus the resulting price with compensation. As can be observed, even when adding the compensation, prices in Spain and Portugal have been significantly lower than those of our neighbours since this mechanism was first implemented.

EU agreement for this winter to jointly mitigate this rise across .

On 30 September, EU energy ministers reached a political agreement on emergency measures to intervene the EU electricity market. The plan consists of three main measures, to be implemented on 1 December, as well as several additional initiatives:

Beyond these three main measures, the Commission aims to set up some emergency liquidity instruments to ensure that market participants have enough collateral at their disposal to meet margin calls and to avoid unnecessary volatility in the futures markets.

Although the objective of both mechanisms (the Spanish one and that proposed by the EC) is the same, i.e., to reduce the impact of electricity price rises on consumers, there are two fundamental differences:

At the same time, we should also mention that setting a gas price cap at European level would be complicated since a wholesale price cap on all intra-EU trades would require, amongst others,  replacing the market with a centralised system to allocate and ration gas and finance the difference between the maximum price and the overall market price. However, the acceptance of intervention mechanisms (such as the Iberian singularity) in addition to these measures is open to discussion.

One thing is certain: while this energy emergency measures package is significant in monetary terms and sets a new precedent for intervention, it may prove to be just the beginning of intervention of the EU and governments across Europe in the coming years. In theory, these temporary measures should go a long way in helping the EU population through the winter. However, many details still need to be addressed for the plan to be effective if finally approved.