As fits the new year, today we’re looking toward the future – more specifically, toward one of the ‘game changers’ that could deeply change the energy world.  When it comes down to blockchains, the question most frequently asked is, ‘What is a blockchain?’

In fact, the whole world has heard of it: this is the disruptive technology behind Bitcoin. Since this most recent application of the blockchain has become so extensive that cryptocurrencies are now one of the most closely-monitored indexes for stock markets, blockchain technology could have at least as significant an impact on every aspect of the energy world, too.

The primary application of blockchains is financial disintermediation, and removing intermediaries between two actors can apply to numerous other sectors. Let’s decrypt a few potential areas for application of this technology dedicated for securing transactions.

A blockchain is a technology for storing and transmitting information without a supervising body. In a sense, it’s a distributed database that replicates the history of exchanges (of energy, for example) in each node making up the network. After an automated validation process, the exchanges are certified, encrypted and added to the blockchain.

A blockchain is therefore, in the words of wikipedia.fr, a secure, distributed register of all transactions carried out since the creation of the distributed system.

One example, amongst others: By using meters as nodes in the network, blockchain technology would allow the implementation of several virtual networks on the public electricity network. Tests are already underway, in the field of research of course, but also operationally, with a number of start-ups all over the world (LO3 Energy, Consensus Systems and Drift in the US, Power Ledger in New Zealand, WePower in Estonia, Evolution Energie, Ponton and SunChain in France, etc.), which are sparking the interest of large groups in the sector (Edf, Engie, Vattenfall, E.On and RWE). In China, too, the blockchain is developing in the shadows of the solar industry.

A revolution that could bring value to energy production and distribution…

The real change for the energy world is the smart grid, made possible in particular with ‘remote’ self-consumption, allowing energy to be consumed at a different location from the site where it has been produced. A concept anticipated by the order of July 2016, which defined collective self-consumption. Self-consumption can therefore be shared over several remote sites, or even used remotely by electric vehicles through smart charging stations.

What’s more, via the Internet of Things and connected smart meters, blockchain technology allows us to contemplate the automation of measurements, maintenance, invoicing, archiving of quantities produced and consumed, documentation of the status of production facilities and keeping of registers of certificates of authenticity for green electricity or CO2 quota certificates, among other things.

But an upheaval of commercial exchanges, too

Energy trading and brokerage could also experience significant changes due to blockchains. In time, there will be automated control of decentralised energy systems via the ‘smart contracts’ enabled by blockchain technology – this new contractual intermediation mode, which will clearly entail changes to regulation, is already in the works in Canada with the launch of Blockchain Power Trust, with others following in its footsteps.

Hence, in the world of energy, this area will without any doubt be the first to see major advances as a result of this technology. The ability to build complex products that aren’t standardised, transactions involving multiple buyers and sellers, transparency in exchanges – all of them advances which would improve market liquidity and rebalance exchanges between producers and consumers. By allowing for secure connections among a large number of players and their data, the blockchain should eventually redefine energy brokerage, bringing it to infinity and beyond.

With a few obstacles

There is one downside, however: depending on the commodities, the blockchain may be the means of introducing more complexity and, eventually, less clarity in transactions. The simplicity with which new players can enter the market was already the instrument of the largest VAT merry-go-round in 2006, which involved CO2 quota fraud…

Since it could make it possible to eliminate centralised actors coordinating the exchanges, blockchain technology relies on confidence in the distributed control system and poses obvious questions regarding governance and sovereignty.

And to bring on this blockchain revolution, we must first resolve a problem that has already been controversial for its current application: Bitcoin. And the challenge is a big one, because Bitcoin, paradoxically, needs energy almost as much as energy needs it. But what is this energy used for? Here we need a bit of calculation.

Energy is the key to the security of this technology: a blockchain is like a distributed database shared by all nodes in a network (computers or servers). The transactions are grouped into blocks there, and the blocks are added to the ‘database’ by linking them to each other like a chain. When a node submits a new transaction, and prior to being added to the chain, it must be verified that this new block is compatible with the whole of the pre-existing chain: this is known as ‘mining’ 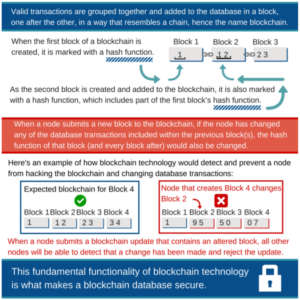 This verification of the chain’s integrity and the management of errors effectively require a massive computing capacity, provided by mining nodes, nodes capable of distributed (and remunerated) calculation. In 2017, the mining of the Ethereum virtual currency consumed as much energy as a country the size of Cyprus, and Bitcoin (essentially located in China) requires more than 29 TWh, equal to three nuclear power plants! Such a system is therefore inadequate for energy micro-transactions when the energy cost of processing the transaction using blockchains becomes greater than the quantity of energy being exchanged. Blockchains devoted to energy must therefore commit to consuming as little  power as possible.