After the frights experienced last winter due to the limitations imposed by the French Nuclear Safety Authority (ASN) on the operation of EDF’s nuclear power stations (see our Newsletter N°5 from April 2017), the price of electricity led a quiet life. Throughout the year, these prices rose, driven upwards by the price of coal. Shocking as this may be for a country where coal-based electricity production represents a mere 1.4%, the price of electricity in France is highly correlated with the price of coal (with Germany placing the orders). Like we said, everything was going well right up until the ASN made the alarms go off once again this past August – déjà vu? 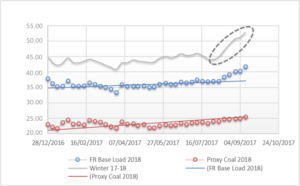 On 16 August, the ASN submitted for consultation its draft decision concerning the review of components manufactured by the Creusot Forge Areva NP plant and installed on nuclear reactors in operation. The draft decision required that EDF examine all manufacturing files for these components. Following a closure for refuelling, EDF will have to send the results of this review to the ASN – two months before restarting each of the affected reactors. The ASN has given EDF until the end of 2018 to complete this review in its entirety. Even if these inspections should only entail ‘paperwork’ and thus have a limited impact on maintenance operations, the reaction in the electricity markets was remarkable (+€3/MWh for Winter 2017-2018).

Some days later, on 24 August, the ASN stated that EDF had reported new anomalies in the manufacturing files of the components at Creusot Forge. According to EDF, nine files were sent to the ASN, all while specifying that ‘the analysis of these discrepancies shows that nothing is likely to call into question the safe operability of the equipment concerned’. Despite these reassuring statements, a state of apprehension settled in the markets, as illustrated by Baseload Cal 2018 price curve (Baseload Cal 2018 cleared at €40/MWh).

A few weeks later came a new announcement from the Nuclear Safety Authority which, on Wednesday 13 September, revealed that it had placed the power station at Belleville-sur-Loire (Cher) ‘under increased monitoring’. Grounds given: ‘the observed deterioration in the level of safety since 2016’. Thus, the power station will be subject to additional inspections made by ASN engineers and technicians, but without going so far as to call for a shutdown. Even if the event is not very significant, there has been an immediate response in the markets: rising electricity prices for Winter 2017-2018.

Finally – and you can bet that this isn’t the last in the series – the ASN ordered the immediate shutdown of Tricastin (4x900MW) on 28 September on the grounds of a risk of flooding in the event of the Donzère-Mondragon canal’s breakdown. Panic took control of the market.

If, in addition to the events concerning the shortcomings in nuclear quality assurance, the return of the reactors to full operation (following scheduled maintenance) is delayed, markets fear the worst. For several months, maintenance schedules have been extended, and the power stations require an additional 2-3 weeks for restarting if compared to the initial calendar. As winter begins, with hydraulic reserves in sharp decline, such a delay may suggest a loss of between 5 and 7 GW of available power. In the event of a cold spell, the impact on electricity prices would be particularly significant. To cover themselves against these risks, market players will, over time, purchase electricity for the months ahead, resulting in an increase in prices.

In light of these events, we offer two conclusions to our readers. The first is addressed to consumers: There is an obvious risk of market tension; the recommendation here is to cover this risk by means of hedging contracts, avoiding short positions.

The second conclusion is one for the long term, aimed rather at planners and legislators. The French electricity system is becoming increasingly fragile. Given the system´s nature, which heavily relies on an ageing nuclear fleet, operational or regulatory inadequacy incidents will inevitably occur more frequently. If, at the same time, the system backup is reduced by decommissioning of thermal power stations due to obsolescence, pollution, or simply for economic reasons, the situation will likely worsen.

Therefore, our second recommendation is addressed to the French energy authorities. The best way to ensure system reliability is to allow reserve production resources to be available in order to meet peak demand. To make this work, it would be necessary to ensure the minimum revenues and / or reduce the costs of this peak production: