It is well known that EDF has a majority presence in the electricity generation in France. More specifically, EDF is the only player which produces nuclear-based electricity, which accounts for more than 70% of the French power mix. The production fluctuations of the French nuclear fleet immediately translate into price variations on the electricity futures market, which ultimately have a significant impact on end-customers’ bills.

Under the European REMIT regulation on the integrity and transparency of wholesale energy markets, market participants must publish all information relating to the capacity and use of their production facilities, including planned or unplanned unavailability of these facilities. EDF does so with the necessary frequency. However, the interpretation of such announced unavailability incidents is not necessarily obvious.

For its part, RTE, in its role as guarantor of the stability of the French electricity system, regularly issues supply/demand balance studies or even warnings and recommendations when it considers that there are risks to the system. RTE and EDF do not always seem to agree on their vision of the future availability of the nuclear fleet. EDF tends to be much more optimistic than what the facts show, while RTE takes a more conservative position.

It is for this reason that, at HES, we closely follow the different announcements made regarding unavailability and system balance studies to be able to assess their real impact on electricity futures prices. In this article we shall focus on the various events and discrepancies between the declarations and announcements made around the French nuclear fleet and their effects on the markets, with special attention of the very peculiar COVID 2020 year. Enjoy your reading!

As was the case with everyone else, the health crisis took EDF completely by surprise in early 2020. The restrictive measures taken in March 2020 to avoid the collapse of the sanitary system and ensure the safety of workers slowed down the planned maintenance activities of EDF´s nuclear fleet, delaying those that were already underway and forcing the utility to readapt its maintenance plan so as to adjust production capacity as much as possible. As a result, in April 2020, EDF forecasted a production of 300 TWh for 2020, compared to the 375 – 390 TWh initially estimated. This was a consequence of the rescheduling of its maintenance plan with the aim of securing electricity supply during the winter season. To this end, among other measures, the operation of power plants during the summer period was reduced to save fuel for the winter. At the same time, RTE published a report forecasting the impact of the health crisis on the electricity system, without issuing any warnings of any specific danger.

It was not until after the ‘first wave’, in June 2020, that RTE published a forecast of electricity supply risk for the 2020/2021 winter period, placing supply under ‘special surveillance’. In this report, a delay in the return to operation of nuclear reactors undergoing maintenance is mentioned as one of the main risk factors. In addition, in another report published around that time, RTE points to a shortfall of capacity certifications in the range of 4.6 and 7.9 GW – which greatly impacted the price of certification imbalances for the AL2020 product.

This time, the impact on electricity futures markets was minor, with just a slight increase in prices. However, it was in the capacity auctions where RTE’s pessimistic forecasts were clearly reflected: 2020 capacity certificates, which had traded up until then at an average price of 19.5 k€/MW, reached 45 k€/MW, and their equivalent 2021 certificates have reached 47 k€/MW compared to 19.2 k€/MW of the previous auction. As a reminder, certifications are normally made on the basis of operating forecasts for specific periods: for AL-2020, at that time, specifically in November and December.

What was the reason for this disparity in numbers? It seems that RTE did not share EDF’s optimistic view on the availability of its nuclear fleet and that it expected significant delays beyond those officially declared.

As winter approached, RTE updated its report on the supply risk by slightly increasing the availability forecast for the nuclear fleet, though keeping it under a ‘special surveillance’. Once again, RTE highlighted as the main risk the return to operation of the numerous nuclear power plants under maintenance, a return which was expected in the following weeks, highlighting the ‘atypical shutdowns’ of 5 reactors whose risk of delay was greater than that of the rest.

It seems that EDF left its optimism aside at the time and announced a lower availability (-9 GW) for November, -3.5 GW for December 2020 and January 2021, leaving its vision unchanged for February 2021. By contrast, EDF did not think it appropriate to align its nuclear capacity certification forecast, which remained at 42.7 GW, well below the average availability expected by EDF itself. Here we must point out an inconsistency with significant consequences for the certification market. Whenever EDF announces its maintenance programmes, and implicitly an available capacity, the certification estimates for this capacity should be reflected in the certification records, which does not seem to be the case. Although EDF and RTE’s forecasts were gradually coming closer together, mainly due to a less optimism on EDF’s side, they were still far from each other: RTE was forecasting around 48 GW by December 2020 compared to the 54 GW forecast by EDF. 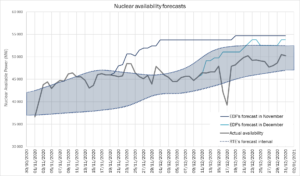 Finally, EDF gradually accepted the reality and reduced its availability forecasts: from an average of 54 GW for November and December 2020 in November, to 50 GW in December, and finally 47 GW – within the range forecast by RTE. On the nuclear certification side, the process was slower and followed the opposite direction. Thus, certification went from 42.7 GW in November to 44.2 in January. In the end, there was no shortfall in certification in 2020 and production was sufficient to ensure the electricity supply without any major problems.

In view of the events of 2020, we understand that the system needs to improve in terms of transparency. Undoubtedly, this should be one of the conclusions of the “retour d’expérience” that the CRE has recently launched on the capacity mechanism. And, if we want to be optimistic, we can assume that the information made available will become more reliable in the medium terms. Until we achieve this higher degree of transparency, the recommendation to our readers is to dive deeper into the available sources and trace the inconsistencies in order to be able to fine-tune the forecasts. Good luck!