Energiewende: a turning point ahead?

With an estimated cost of EUR520 billion by 2025, electricity bills for average households more than doubling by the same date, utilities facing huge impairments, the electricity system losing reliability, and with rather poor results obtained in terms of environmental targets originally set, the German Energy Transition process (Energiewende) may well be deemed a complete fiasco.

In 2011, Germany’s decision to shut down its nuclear power plants fleet became an element of distortion for the already ongoing Energiewende (Energy Transition) process. Here we shall look into the nuclear phase-out development, as well as into its most important consequences, and which have negatively impacted the goals initially set by the Energiewende.

By the end of 2010, the country´s 17 nuclear power reactors accounted for approx.15% of the total installed capacity (20,48GW) and supplied 133TWh, more than 25% of the electricity consumed, with legislation at the time requiring their shut down by 2036. However, in the aftermath of Fukushima´s nuclear disaster in 2011, the German government decided to almost immediately shut down 8 of its nuclear power reactors (8,41GW), and phase out the remaining 9 units by 2022 (one of which, Grafenrheinfeld, 1,27GW, was closed in 2015).

According to latest data published by the BNetzA (Bundesnetzagentur), the Federal Network Agency, the proposed shutdown calendar for the remaining units looks as follows:

As can be observed, and if we assume that Gundremmingen (1,284GW) is taken off the grid by the end of this year, a total 9,516GW will be phased out between 2019 and 2022 if everything goes according to plan.

In order to make up for this ‘self-imposed’ reduction in installed capacity, an impressive roll-out of renewable energy resources has been taking place, namely wind and solar technologies, the latter by means of heavy subsidies which have proven unsustainable in the long run, and are partially to blame for the significant increase in power prices borne by end-users. A complete contradiction, one might think, given that one of the main targets of the EU Power Market Liberalization Directive and, in turn, of the Energiewende, is to significantly reduce the electricity bills of households.

The table below provides us with a very well-defined picture of cost distribution and evolution of average power prices over the last 10 years for households using 3.500 kWh/yr. 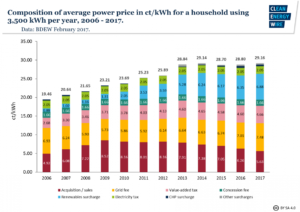 As we can see, the cost inherent to renewable surcharges increases significantly from 2013 onwards, and becomes one of the main reason why prices to end-users have experienced a rise of approx.12.6% (3,27cts/kWh) since 2012.

Note: the need to expand the transmission network (please see further below) is also affecting end-users´ bills. In the above graph, we can observe that ‘Grid fee’ associated costs have seen a considerable increase since 2013, a component which is only bound to rise in years to come.

It is for these reasons that Germany has put in place a series of “Reserve Systems” to ensure security of power supply:

The table below shows total capacity committed to a ‘Reserve Status’ as per BNetzA (Federal Networks Agency) data of March 31st, 2017. 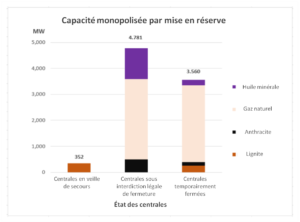 The need to use a considerable amount of electricity production originating from both coal and gas-fired based power plants (existing and new-built) in order to guarantee the stability of the electricity system is compromising Energiewende´s environmental targets:

According to think tank Agora Energiewende, emissions saw a total reduction of approx. 28% in 2016, and their most realistic forecasts place them at 30-31% by 2020, rather than the overestimated 35% recently announced by the German government.

Obviously, the decision to dismantle Germany´s nuclear power fleet did not come without controversy, with affected utilities pressing claims for compensation on the basis of continuing with the nuclear tax linked to license extensions agreed in September 2010, write-down of plants, cancelled upgrades which were already ongoing at the time, and also decommissioning costs brought forward. With the total amount of claims adding up to a few billion Euros, the Constitutional Court of Karlsruhe has given the right to the operators of the plants, leaving these and the government to agree on a final figure before spring 2018.

In this context, we should mention that a dispute concerning the management of radioactive waste was resolved in December 2016, with nuclear utilities having to pay EUR23.6 billion into an energy phase-out fund no later than 2026, and being then cleared of any liability for final disposal of used fuel. The deal will leave German taxpayers footing a potentially sizeable proportion of the bill, especially for the disposal of nuclear waste in the long term. The German Institute for Economic Research in Berlin (DIW) estimates that the nuclear phase-out, which, including clean-up operations, will take at least several decades, could reach 170 billion euros.

Germany´s decision to unilaterally phase out its nuclear power fleet by 2022 means that a rather considerable amount of electricity production generated by intermittent renewable assets will need to be backed up by fossil fuel based power plants in order to guarantee the stability of the electricity system.

One of the most immediate implications is that the Energiewende is resulting incredibly expensive. The following table shows an indication of detailed actual and forecasts costs:

These huge costs result in end-users seeing their electricity bills rise considerably, by an estimate of approx. EUR20.00/month by 2025 (calculations based on the consumption of an average 4-person household).

But, equally important, the country´s Energy Transition project, at a time viewed by other countries as a model to follow, is failing to reach some of its most important environmental targets in the short-term (2020).

It is now obvious that the Energiewende´s initial approach was far too ambitious. But, most importantly, where is it heading to right now? Or, put into other words, should it take a few steps back before becoming just the piece of paper it is written on?