New trend: your electricity bill financed by the public debt

It is still France which, through its tax inventiveness, is at the origin of this trend. On 1 January 2016, the CSPE (Contribution to the Public Electricity Service) was replaced by the TICFE (Domestic Tax on the Final Consumption of Electricity). Many said it was “six of one and half a dozen of the other”, but this was neglecting an important feature of the TICFE: it does not increase! And this, even when public service charges have been increased by more than 40% between 2016 and 2021.

Today, with the reform of the German EEG (Erneuerbare-Energien-Gesetz – Renewable Energy  Act), we are witnessing a real change of scale: on 15 October last, the Bundesnetzagentur (BNetzA) (Federal Network Agency for Electricity, Gas, Telecommunications, Post and Railway) announced this good news to German consumers: the EEG contribution (EEG Umlage) for 2021 will drop to 65 €/MWh. Another consequence of this announcement: the federal budget will contribute with €10.8 billion to the development of renewable energies (this contribution alone represents almost twice the French support to renewable energies development in France).

Is Covid to take the blame, again?

Before analysing the scope of these announcements in more detail, we would like to go back over the history of the respective developments of the CSPE – TICFE and the EEG Umlage since their creation (2000 in Germany, 2002 in France). 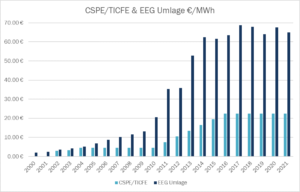 Does the relative stability observed in recent years really reflect an inflection in the cost of supporting renewable energies?

In France, the answer is clearly no: and the PPE (Multiannual Energy Plan) even forecasts an increase of these costs by more than 30%, to peak beyond €8 billion in 2025. Formerly a “Contribution”, the CSPE has become a “Tax”: the TICFE, fixed by the finance laws (the carbon tax was supposed to complete the budget balance, but its evolution has been stopped since the yellow jackets crisis).

Let us return to the German case. The idea of the new law on renewable energies (EEG) (which has been approved by the cabinet but not yet voted) is similar to the French idea put in place by France in 2016: the contribution is transformed into a tax that is no longer earmarked for dedicated expenditure (France had initially set up a “Special Allocation Account”), with the budget to be balanced by future revenues obtained from the new CO2 tax included under this same law.

It so happened that, without waiting for this law to come into force, the Bundesnetzagentur, together with the Ministry for Economic Affairs and Energy, set the amount at the level provided for by the law – €65/MWh – by letting the federal budget subsidise this contribution (which has not yet been transposed into a tax) to the tune of almost €11 billion.

In its communication, the Ministry clearly attributes the responsibility for this slippage to the health crisis we are currently going through:

This evolution of the cost of financing renewable energies is thus put under the account of the coronavirus crisis, which has weighed on demand and on wholesale electricity prices (renewable production not having been affected by the crisis), and the necessary money will come from the “Corona-Konjunkturpaket” and its 130 billion € which, like the 100 billion € of the “France Relance” plan, are largely financed by the State debt.

What developments are to be expected for the future?

France foresees, in its Programmation Pluriannuelle de l’Energie (PPE) (Multiannual Energy Plan), that the competitiveness of renewable energies will lead to a very significant drop in the need for support for these energies: less than €4 billion in 2035. Germany, for its part, is confident that the new EEG law will pave the way for a post-support mechanism era, a “paradigma shift”.

In fact, what happened this year with the Covid 19 crisis is a drop in demand and, therefore, a drop in the carbon marginality of the electricity mix (wind, photovoltaic and hydraulic production are not experiencing a health crisis). With the French (PPE), German (EEG 2020) and European (Green Deal – a revision of the ambitions of the Directive on renewable energies) ambitions, what we have experienced is, in fact, just some anticipation of what is foreseen by these policies: a drop in carbon marginality in the shaping of electricity prices in the market.

It seems to us that the inability of the “Energy Only” market to remunerate the full costs of power generation is once again largely underestimated. On the other hand, what is not underestimated by politicians, even in Germany, is the difficulty of showing the burden of renewable energies on electricity bills in a transparent manner!