PPE: renewable gas on the upswing… concealing a decline in overall gas usage

The Programmation Pluriannuelle de l’Énergie [multi-annual energy programing] (PPE) was finally presented by the Minister for Ecological and Solidarity-based Transition, François de Rugy, on 27 November. It has established the priorities for action to be undertaken by public authorities for the 2019-2023 and 2024-2028 periods.

Several objectives were announced and/or confirmed, including, in particular, ‘turning our back on fossil fuels’: a 20% decrease in the primary consumption of fossil fuels by 2023 in comparison to 2012, and 35% by 2028.

As for natural gas, it has been the subject of ‘a contrasted vision’, as it is ‘a fossil fuel, whose consumption, must be reduced, but it is the least CO2-emissive and holds prospects for decarbonisation in the form of biogas, which, as such, could play a role in the energy transition’.

The PPE specifies that, for 2030, the goal is to ‘increase the share of renewable gas in gas consumption to 10%, assuming a sharp drop in costs’. If the gas industry welcomes the confirmation of the development path for renewable gas, which was already provided for in the 2015 French Energy Transition Act (LTECV), it ‘is drawing the Government’s attention to the need for maintaining attractive feed-in tariffs so that the sector can mature, and projects can be developed at a steady pace’.

Under the PPE’s benchmark scenario, the primary consumption of fossil fuels, which was 1,412 TWh in 2017, decreases by more than a third in 2028, to reach 940 TWh. The decline is greater for fossil fuels with higher carbon content. 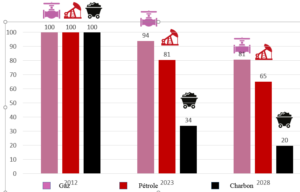 The PPE states that ‘natural gas is today an essential energy source for the French energy system. Its storage ability is currently necessary in order to cope with winter peak periods both for heating and electricity supply. Furthermore, natural gas is the lowest carbon-emissive fossil fuel. However, the fact remains that it is a fossil fuel and therefore must be replaced in the long run by biogas or new syngas produced by using renewable energy sources: hydrogen or power- to- gas.’

The main measures envisaged to promote the use of renewable gas are:

Thus, if the 2030 goal of 10% of renewable gas consumption is confirmed, after reaching 8 TWh in 2023, its development is subject to the condition of a ‘sharp drop’ in costs. And that’s where things start heating up from the industry’s point of view…

Indeed, the PPE indicates that ‘the costs of renewable gas production today are high, but prospects for reduced costs are pointed out by developers. The multi-annual energy programing has set a goal of a production of between 24 to 32 TWh of biogas by 2028, depending on the actual cost reduction reached. Price caps will be established, and if the production costs don’t decrease as much as expected, the pace of construction for new production capacities will be adjusted.’

If there was a consensus during the public debate to give priority to biomethane injection into the gas grid, compared to a local use for producing electricity, the issue of the cost of biogas and the necessary support for the sector have been debated, with some considering that the replacement of fossil natural gas with renewable gas was still largely a gamble…

The industry is concerned about the specific policies proposed by the PPE, which are seen as half-way measures, and would position renewable gas as the least-encouraged of the RES [renewable energy sources]: the Government envisages an overall additional public support package in between 7 and 9 billion euros for the 2018-2028 period, under the condition that biomethane production cost drops to 67 Euro/MWh from 2023 onwards.

The package envisaged for the 3rd pillar of the French RES would thus represent less than 10% of the financial support granted to the RES over the next ten years:

If the sector is resolute in its commitment to achieving this order of magnitude in costs by 2030, it considers that this goal may prove impossible to reach in such a short-time frame while maintaining a balanced approach in the management of the different types of agricultural inputs and waste. Indeed, methanisation is a sustainable solution, having the advantage of creating new value for agriculture and the environment (returning to the land, carbon storage, water quality, biodiversity, etc.), territories, the circular economy and local jobs.

Conversely, even the higher scenario of 34 TWh by 2030 featured in the PPE appears ‘unambitious and not very representative of the dynamics currently observed throughout the regions, as evidenced by the backlog of 600 projects waiting for final green light according to the gas network operators. And this goal is even less ambitious when compared to the targeted decline in fossil fuel consumption, envisioned at over 80 TWh for natural gas consumption by 2030…

In conclusion, if the figure of €67/MWh production cost (by 2023) is reasonable for large facilities, it is not feasible for small ones, and could lead to recriminations from farmers (according to Engie).

‘So as not to become left out amongst the renewable energy sources in France, the level and conditions of the State’s support must be adjusted in line with the pace of development of renewable gas sources. We should give renewable gas produced in France a chance,’ concluded the France Gaz Renouvelable Association. And let’s not forget either the development potential presented by hydrogen or ‘Power-to-Gas’.