At this stage, we are used to watching the State intervene in the electricity market, from the side of supply as well as demand.

In production, the massive subsidy for renewable energies, the emission allowance trading system (EU ETS), the aid provided to the industry through cogeneration support mechanisms (CHP) and other mechanisms which are more or less novel (waste recycling, biogas, etc.) have had a damaging influence on the electricity market.

On the demand side, the interventions are just as numerous, less harmful to the sector though they may be: regulated rates, ARENH, TRTAM [transitory regulated tariff for a liberalised market], aid for demand response or interruptibility, etc.

With the old regulated system, all of these interventions were handled by a mechanism which, via selling tariffs, adjusted the income necessary to suit all the needs or whims of the Planner. With the market’s new system, this is no longer possible. Market players’ income is determined by the wholesale market price, which itself depends in large part on the decisions of the Planner.

After years of state intervention into the market, it’s reasonable to ask ourselves whether a real electricity market even still exists. The long-term signal for investments in production facilities is irrevocably distorted and incomprehensible. No one in possession of all their faculties would  invest in generation facilities in a market that comes with such a level of uncertainty.

Nor are the new market mechanisms designed to mitigate this situation providing the awaited signal, since the investor is certain that other new distortions will occur once the investment has been made. In France, a multi-year capacity mechanism (to improve visibility for investments) will be implemented at the end of the year; this is already in place in the United Kingdom and is not providing the anticipated results. The fear is that this won’t work in France, either.

In the orbit around all this planning, the Programmation Pluriannuelle de l’Énergie [multi-year energy programme] (PPE)[1] is currently open for business. Each lobby is trying to make the most of the opportunity: prolonging the lifespan of nuclear facilities to 60 years of operation; replacing nuclear generation with renewably-sourced generation; momentum for cogeneration as support for the industry; development of the biogas, energy storage, hydrogen, power-to-gas, etc. All energy policies are possible, although not at the same cost or at the same levels of security. The decision comes back to the State in its role as planner. What is certain is that, regardless of the final decision, the new energy policy will not come into being without having an impact on the electricity market. And the fear is that this part of the equation is not being factored into the PPE discussions.

For years, we’ve played the sorcerer’s apprentice with the electrical system. The State develops its energy policies without worrying about the consequences of its decisions on the wholesale market. The market’s players can stand it no longer. The French system is losing its reserve margin and its reliability. If nothing is done about this, sooner or later we’ll find ourselves face to face with an undesirable situation: system failure. 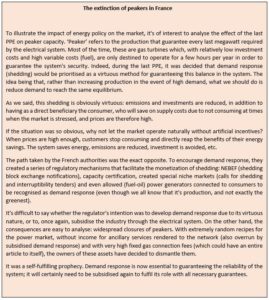 [1] Drafted by the French government in collaboration with all of the interested parties, the multi-year energy programme (PPE) lays out the public authorities’ positions and priorities for action for managing all forms of energy on the continental, mainland French territory. The PPE covers two periods of 5 years and is revised every 5 years.

All strategies and planning documents containing positions on energy must be compatible with the positions expressed in the PPE. In particular: (i) the establishment of quantitative objectives for launching calls for tenders for electrical production facilities, for capacities for shedding electricity consumption, or for investments allowing the injection of biomethane into gas networks; (ii) the definition of the positions with which the authorisation to operate new electricity production facilities, as well as EDF’s strategic plan, will have to be compatible; (iii) the definition of the level of security of supply for the French energy system, via the establishment of loss of load expectation (LOLE) used to evaluate the supply/demand balance for electricity, or the storage of gas to be maintained for security of supply.

The PPE will be revised by the end of 2018, and then every five years, according to the same methods as the initial programme.