The entirety of the natural gas storage capacity put up for auction was subscribed. The CRE underlined the success of the 2019-2020 storage capacity auctions, the second auctioning campaign launched since the 2018 reform of third-party access to gas storage was introduced. Organised by Storengy and Teréga, the auctions began on 13 November 2018 and concluded on 21 February 2019: 28 sales took place. The total amount of capacities being auctioned was allocated, at prices that varied between €0.83/MWh and €4.29/MWh. Revenue from auctions therefore tripled in comparison with the previous year (which had resulted in prices of between €0 and €2.02/MWh).

The CRE set the storage compensation tariff component value applicable from 1 April 2019 at €213.46/MWh/day/year, representing a decrease of 28% when compared to the previous year. This tariff component, added to  the tariffs for using the natural gas transmission networks (ATRT) in 2018, corresponds to the difference between the authorised revenues for storage operators (Storengy, Teréga and Géométhane) set by the CRE and the forecasts for income collected directly by these operators, following the results of the storage auctions. The storage compensation is collected on a monthly basis by transmission operators (GRTgaz and Teréga) and transferred to the storage operators.

But could there still be problems hidden behind these seemingly positive results?

The new auctioning modalities for storage capacities were no strangers to the positive results recorded this year. Last year, in the haste rendered necessary by the late adoption of the storage reforms, auctions took place during a very restricted timeframe: from 5 to 26 March 2018. The result was a collapse of the winter-summer spread for PEG [gas transfer facility] hub: 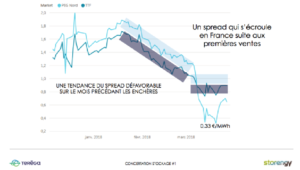 This year, the auctioning period took place over three months rather than three weeks, with limited volumes up for sale each time, explaining the tripling in auction revenues. Although auctioning conditions were much better this year, certain products (particularly slow storages) still only yielded limited value. In addition to questioning their true utility to the security of natural gas supply in France, the question of whether storage operators could offer a better product mix at auctions should also be raised.

As already mentioned in the introduction, storage compensation helps cover the difference between authorised revenues for storage operators, established by the CRE, and forecasts of their income derived primarily from the results of the storage auctions.

The CRE updated the authorised revenues for storage operators last December (decision dated 13 December 2018) but did not call into question the perimeter of regulated storages set in March 2018. Hence, this scope still includes:

This represents a total of approximately 152 TWh of storage included in the perimeter regulated by the CRE under the storage reform implemented on 1 January 2018, whereas with 129 TWh of subscribed capacities, the CRE considers the security of natural gas supply to be guaranteed for the 2019-2020 winter season…

The difference arises from the horizon chosen when considering security of supply. But in a very interesting turn, the DGEC (Directorate General for Energy and Climate) published a decree (no. 2018-1248 of 26 December 2018) a few days after the 2019/2020 guaranteed revenues for storage operators were published by the CRE, stating that:

‘During the second period of the multi-year energy programme (PPE) (2019-2023), the underground natural gas storage infrastructures necessary to guarantee security of supply in the medium and long term are those listed below, representing a working capacity of 138.5 TWh…’

The sites that are mothballed and under development are now excluded from the PPE by the DGEC! But they will still be included in the perimeter regulated by the CRE in 2019…

Strangely, storage regulation is set by calendar year, even though compensation (as with storage years) begins on 1 April of each year. In fact, storage operators were able to enter the regulated system on 1 January 2018, being in the perimeter from this date onward, therefore including the first quarter of 2018, although storage compensation only began running on 1 April 2018. As a result, the value of the compensation was inflated, with the 2018 storage compensation having to cover for 12 months of regulated revenues in only 9 months…

However, during the first quarter of 2019, transmission system operators continued to pay storage operators compensation collected based on the tariff component as at 1 April 2018 (€297.10/MWh/day) … Thus, for the period running from 1 January to 31 March 2019, the amounts paid came to €176.5 M (which, incidentally, is practically as much as the operator income forecasts for the entire 2019 year).

The resulting storage compensation unit value of €213.46/MWh/day/year is in line with the amount just published by the CRE and applicable from 1 April 2019.

This new amount actually represents a decrease of 28% when compared to last year´s, but its value calls for a few comments:

As a conclusion, with a regulation perimeter brought to the strict minimum (129 TWh instead of 152 TWh), optimised auctioning of storage and the elimination of peculiarities from the discrepancy between regulation years and storage years, it would seem feasible to bring the value of storage compensation below €140/MWh/day/year, or less than half of its initial value in 2018/2019.

These improvements would have a much stronger effect than the changes currently envisaged by the CRE, by extending the scope of sites subject to compensation to sites connected to  high pressure Transmission Network (whereas, for the moment, only sites connected to  Distribution Networks, whose loads cannot be shed without any risk, are charged with the storage compensation). Indeed, the CRE indicated that a basis for collecting compensation extended to all transmission consumers (and excluding exemptions associated to interruptibility) would lead to a compensation tariff component of approximately €180/MWh/day/year.

On the other hand, storage compensation would represent an annual amount of nearly €80 M for all consumers connected to the Transmission Networks, consumers who, until now, did not bear this level of costs, neither under the Third party access to storage negotiated scheme in force for the last ten years nor in the first two years of the regulation. Such an evolution would lead to an average increase of approximately 40% of gas transmission tariff costs for transmission consumers with an impact that could be greater or smaller depending on the consumers’ gas demand modulation. Power plants using gas for electricity production would be particularly affected, with gas transmission tariff costs that would double.

Such an evolution seems neither feasible nor desirable!