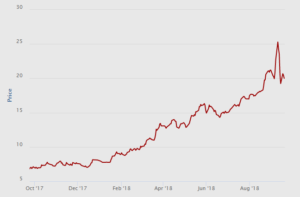 As of last August, the financial world was already labelling CO2 as the best-performing raw material of 2018, with a nod to its price skyrocketing by 300% in one year (and nearly 400% if we take into account the peak of €25.16/tonne of CO2 reached on 10 September).

Discussing the performance of a product that is generally seen as a tax seems provocative at the least! Are they saying that the CSPE [Contribution to the Public Electricity Service tax] is not very efficient because it doesn’t seem to have risen from €22.5/MWh since 1 January 2016? Have we tipped our hat to the performance of the CSG [general social contribution tax] which, as of 1 January of this year, leaped up 1.7 points from 7.5% to 9.2% (a performance of 22.6%!)?

These market shifts and envious comments are here to remind us (10 years after the great financial crisis and the fall of Lehman Brothers) that, when we’re talking about CO2 and its price, it’s not a raw material, nor is it a gas or thin air, but a financial product: the EUA (European Emission Allowances).

Our goal here is not to retrace the chaotic and sometimes inflammatory history of this product. As a reminder of this, we will make do with this diagram:

We are, rather, proposing that we shed some light on certain aspects and consequences of these changes in the market.

Reasons for this CO2 price increase

The progression of EUA prices already has a long history of being extremely volatile. As a market whose base is essentially regulatory in terms of the European Union, this market evolves as decisions are taken (or announced or expected). In the present case, the carbon market’s current performance is generally attributed to the market’s expectation of the January 2019 implementation of the market stability reserve (MSR), the key element of the UE-ETS reform adopted last year and published this year (Directive 2018/410 of 14/3/2018).

Impact on the price of electricity: A second CSPE

Electricity futures has also been a very ‘high-performing’ market these last twelve months! Over one year, the French baseload Cal ’19 contract rose from approximately €40/MWh to €60/MWh (turning in a respectable performance of 50%). Of course, the price of coal was also ‘high-performing’ at nearly 20%, but the primary factor in this increase continues to be the impact of the EUA price rise. This impact is even quantified in Article L 122-8.I of the energy code: 0.76 tonnes of CO2 per MWh (conveying the somewhat counter-intuitive reality of the French price’s serious dependency upon coal electricity). On this basis, the impact on the price of electricity may be estimated as falling between €15 and €20/MWh (i.e., 25-30%).

Impact on the consumer

Until now, the French consumer has been partially protected from this hike by the ARENH mechanism, which caps the cost of its basic supply at €42/MWh. However, this mechanism has a time limit (2025) and is capped for supply from suppliers who are EDF competitors (until now, the cap of 100 TWh did not apply, but with EDF’s market losses, this could occur as soon as the next allocations in November 2018).

Furthermore, following an additional mechanism implemented from 2016 (when the market price was below the ARENH price) for electro-intensive consumers (see Article L 122-8.I of the energy code), these consumers may be compensated for the CO2 impact on the price of electricity. But the basis for evaluating CO2 used for the compensation is only set at €5.91/tonne (it’s doubtful that this value will be revised), and this measure also has a time limit (2020).

These protections are therefore only partial, and the impact is already being felt by industrial consumers (and certainly will be felt soon by individuals).

Impact on the environment

Perhaps we should have started with this point, because it’s the aim of the European system of trading quotas of greenhouse gas emissions (SEQE in French), better known under its English name, the European Trading Scheme (ETS).

From a wider standpoint, this limited impact of the ETS on the environment grew out of the debates and conclusions presented during the Conference on the ‘2018 State of the EU ETS’ in Paris on 13 June last (in the presence of the DGEC (Directorate General for Energy and Climate), EDF and a number of large industrial groups):

If the prices of CO2 were to remain permanently at high levels (which, in view of the history, is not a given), demonstrating a genuine scarcity of allowances for large companies, we would enter into a new paradigm. This mechanism would shift from a system that subsidises large European industrial sectors to a system that would tax these same companies.

Will it become a zero-sum system, now that the system is living on outside the Kyoto Protocol (i.e., outside the non-EU objectives)? Ultimately, the EU member states as well as various European funds for research and innovation are benefiting from the auctioning off of these allowances, and this revenue may, in the end, come back to the industry. Doubts are to be expected, and the critics of such a system are not just on the other side of the Atlantic. Pope Francis already pointed it out in 2015:

‘The strategy of buying and selling “carbon credits” can lead to a new form of speculation which would not help reduce the emission of polluting gases worldwide. This system seems to provide a quick and easy solution under the guise of a certain commitment to the environment, but in no way does it allow for the radical change which present circumstances require. Rather, it may simply become a ploy which permits maintaining the excessive consumption of some countries and sectors’ (Encyclical: Laudato Si)