According to the Gregorian calendar, on Tuesday, 21 December, the signal for the beginning of the winter season was officially given. For Europe, however, this period means chaotic times as far as the energy market is concerned. Utilities are switching from fossil energy sources to renewable ones. As the latter are non-dispatchable per nature, power generation increasingly relies on gas to satisfy demand. On top of this, LNG is being mainly shipped to Asia to satisfy its hunger for energy, and Russia, Europe´s main gas supplier, is controlling its deliveries to pressure the EU on the Ukrainian crisis, with Nord Stream 2 ready to go (and even filled with gas) and take some pressure off this situation. All this has caused an unprecedent increase in gas prices, and thus, in power prices all over Europe. And, in the midst of all this, as if that were not enough, France received an early Christmas present, with a bitter taste: some cracks in the pipes of a reactor were found during an inspection, which resulted in EDF being forced to close two of its most important nuclear power plants (Chooz and Civaux), with a total capacity of 6GW. All this could jeopardise the energy supply in France during the winter.

The growing nervousness resulting from this situation has been clearly reflected in the markets: gas for January delivery has risen by 7.7% to a new high. As a result, many European countries are paying more than 400 EUR/MWh for electricity these days. Among these, France is the country that has been hit the hardest.

It must be understood that, in France, nuclear energy is the dominant primary energy for electricity, so much so that nuclear energy represents about 70% of the French power generation mix, thus indicating the high dependence of the price of electricity on the proper functioning of the country’s nuclear power plants. The production fluctuations of the French nuclear fleet immediately translate into price variations on the electricity futures market, which ultimately have a significant impact on end-customers’ bills. And EDF already has a track-record of overestimating their nuclear fleet availability, as was the case last winter (HES article, February 2021).

The stop of EDF´s four largest units comes at the worst possible time. The problem could force the stop of other nuclear power plants since, according to the Institute for Radiation Protection and Nuclear Safety (IRSN), further control actions at the other reactors currently in operation cannot be ruled out. 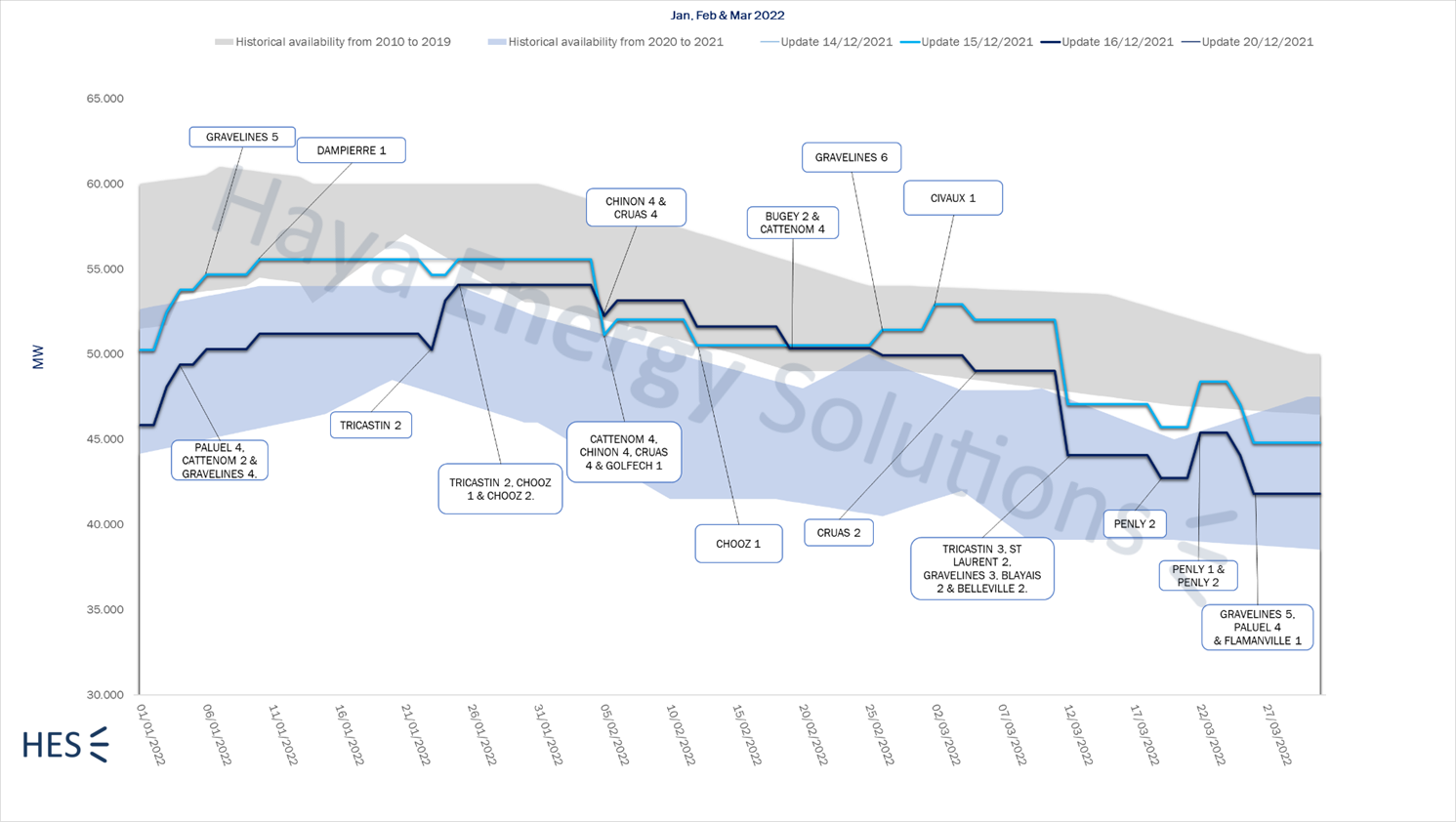 The observed evolution indicates a shortfall in the availability of nuclear power plants due to the absence of the 4 nuclear reactors mentioned above. The maintenance schedule of the nuclear fleet was already particularly heavy for this winter season and was also disrupted by the Covid-19 pandemic. This, together with the stop of these four reactors, has let RTE to estimate the availability of the French nuclear fleet for January 2022 in the range of 43GW to 51GW, the lowest level ever reached for this time of the year, and even to “prepare to operate the system in a degraded situation”. On top of that, EDF has recently reduced its nuclear generation forecast for 2022 by 30TWh, to 300-330TWh, after finding the same issue in another reactor (Penly 1), which has also been stopped. This has had a significant impact on investors trust on EDF, which lost more than 20% of its market value last Friday.

The consequences of the above range from the economic to the social fields. Prices per megawatt hour of electricity have soared, reaching peaks never seen before in France, as can be observed in the graph below. These curves show how power prices for Q1 2022 have evolved across 2021. On the demand side, market players that had hedged their positions in the long term will not have been hit by this sudden change. Meanwhile, electricity purchasers who had decided to wait to act until the current dates could undoubtedly be compromised by the changes. 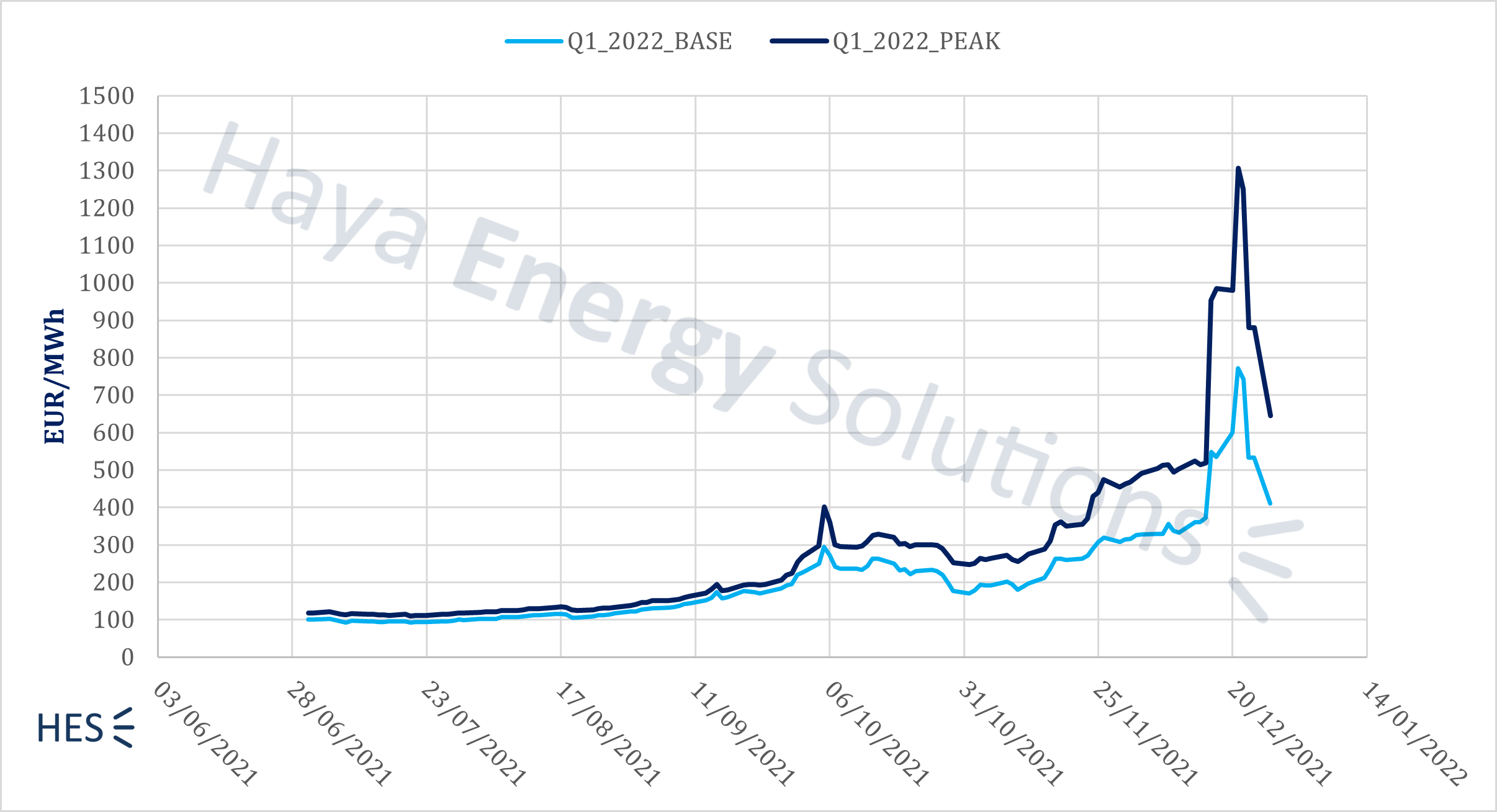 We can observe how, at the beginning of the year 2021, electricity for delivery in the first quarter of year 2022 was available at average prices of roughly 100 EUR/MWh, as the effects of increasing gas prices did not begin to be reflected in the French energy market until the beginning of September, where we can observe a gradual increase in prices, fluctuating between 200 and 400 EUR/MWh for baseload contracts and 300-500 EUR/MWh for peak contracts, from September 2021 to November 2021. It is not until mid-December, when safety issues were encountered and both Civaux and Chooz were taken off the grid, that we can observe the most remarkable movement in the price curves. The sudden absence of almost 6GW of nuclear availability led to an unprecedented price increase, with the baseload contract reaching over 700 EUR/MWh and the peak contract reaching astronomical amounts of around 1000 EUR/MWh.

With energy markets experiencing maximum tension, electricity prices soaring across Europe and the price of natural gas – the natural alternative to nuclear power as a back-up for the system – skyrocketing, the outage of the four reactors – with a combined daily capacity of nearly 6GW – comes close to the peak winter season, the busiest time of the year due to the high demand for electricity (and gas) for heating. Therefore, the risk of having power supply compromised in case of a cold snap is high.

EDF would need to spend about 2 billion – 3 billion euros ($2.3 billion-$3.4 billion) in 2022 to buy back some of its power coverage to offset the outage of its four nuclear reactors. And this is precisely what is feared at the highest levels of government. The French government says that it is prepared and is working on measures to deal with the coming storm, but they are keeping in mind the upcoming elections.

Once again, France is facing a risky winter season due to nuclear availability issues, which overlaps with a difficult energy situation at a European level. Clearly, neither the nuclear issue nor the energy ones will be solved in the short term but relying on an aging nuclear fleet to ensure the country´s energy supply does not seem to be a good solution anymore. Given the latest developments in nuclear availability and the fact that there are many reactors facing a decennial inspection during the next months, it would be advisable to closely follow the evolutions on this matter. HES’ NucMonitor© tool allows for a weekly update on nuclear capacity availability, which can be very useful in anticipating any subsequent market reactions. The next three to four months may lead to unexpected consequences for all industries, with a particular hit being taken by those whose energy supply policy led to no hedging. We will keep you updated!