During the presentation of its results for the first quarter of 2017 on 9 May 2017, EDF highlighted the negative impact on turnover in France of ARENH (Regulated Access to Historic Nuclear Electricity) sales and market activity: -49 million € allocated ‘mainly to production and sourcing for ARENH subscription’; and causing Xavier Girre (CFO EDF) to state the following: ‘We’re deeming it also necessary and equitable to reform the ARENH mechanism so as to prevent it from being as biased as it is today’.

Having been established by the NOME [New Organisation of the Market for Electricity] law of 7 December 2010 and in place since 1st July 2011, the ARENH mechanism is already an old story. It even seemed promised to become obsolete with the wholesale markets which, since December 2014, have maintained their position at levels below the price set for the ARENH (with the notable exception at the end of 2016) to the extent that the ARENH had not been the subject of any demand for the 2016 supply year.

Why revive this debate when a new decree on 21 March 2017 further framing the mechanism has just been introduced and has demonstrated its effectiveness during the window of 16 May 2017? Let’s analyse the current situation, put this third parameter of the price for electric energy into context and define its challenges.

First and foremost, let’s get back to the principle:

For a transitional period from 1st July 2011 to 31 December 2025, the ARENH was established ‘in order to ensure the freedom of choice for the electricity supplier all while benefiting the attractiveness of the territory and all consumers in the French electro-nuclear facilities competitiveness’. The total volume provided is limited to 100TWh/year.

The ARENH product is annual by definition; however, in order to allow suppliers to adjust their needs according to the evolution of their portfolio, subscription takes place at two half-yearly subscription dates (November and May). With the aim of strengthening its annual nature and limiting arbitration opportunities, the system provides for a so-called ‘monotony’ clause forcing suppliers to ensure that their demand moves in the same direction during two consecutive half-yearly subscription dates. (Clause reinforced by the Decree of 21 March 2017)

The figure below (excerpt from the Competition Authority report dated 8/2/2017) is a good illustration of the success and effectiveness of the system as well as its correlation with wholesale market prices: 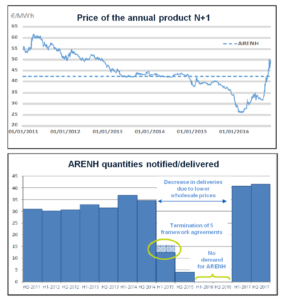 The mechanism’s rational has, in fact, been disrupted since, against the expectations of the 2010 legislator, the price of the ARENH is above market prices. Such disruption is even more significant when, in the space of a few months, market prices alternate being strongly below, strongly above, and then again strongly below the ARENH level!

The behaviour of the players during the window of 16 May 2017 displayed the effectiveness of the new decree: the volumes ordered for the first half of 2017 have been renewed for the second half, observing the product’s annual logic, whereas with the BL Q3 market prices: 32.15€/MWh, BL Q4: 42.85€/MWh and capacity to 10,000€/MW, the ARENH was out of the money by~4€/MWh!

So, we’re not too sure which ‘bias’ was implied (commercial asymmetry between EDF and alternative suppliers: payment periods,  dealing with the volume limit, portfolio adjustment, penalties…?). On the other hand, it seems more important to us that the debate now focuses on the issue of consistency among the 3 parameters defined by the NOME law, namely: market prices, the capacity price and the ARENH.

‘With nuclear production representing over 70% of the total, two items become paramount: (i) that the ARENH regains a level reflecting the complete cost of this French nuclear generation (see our article (1) on this subject), and (ii) that the capacity market matures to ensure the competitiveness of the ARENH (including capacity guarantees) vis-à-vis the wholesale market.