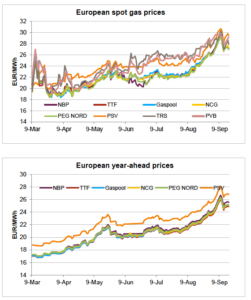 Since March, worldwide oil and gas prices have taken off, by about 25% for oil and nearly 50% for gas in Europe. The causes are, above all, geopolitical, with several flashpoints: Iran, Venezuela, China… and one single detonator: the United States, under the leadership of Donald Trump.

The prices of natural gas in Europe have followed those of oil, further aggravated due to a gas ‘cleanliness premium’, reflecting the recent increase in CO2 prices.

Although tensions with North Korea have temporarily eased (but with no notable progress toward eliminating the North Korean nuclear threat…), the tactics used by Donald Trump’s United States remains the same: withdrawal from signed agreements, threats of new unilateral sanctions (or new tariffs), some semblance of negotiation, but above all seeking a position of strength in order to make adversaries surrender, even when they are allies such as Europe or Canada… All to please an extremist US electoral base, but one that is growing narrower in the run-up to the midterm elections in November.

Where is it all going?

A quick reminder of recent events:

In early May, Donald Trump announced the United States’ withdrawal – expected for several months – from the Iran nuclear agreement, reached in 2015 with France, the United Kingdom and Germany, as well as Russia and China. Although all of these countries announced their intention to continue respecting the agreement, with the Iranians having effectively stopped their military nuclear activity, the consequences on the price of oil were immediate: many companies, following Total’s lead, withdrew from their oil or gas projects in Iran, with the prospect of American sanctions on their interests in the United States being so crippling.  This has opened Iran’s doors to new players, beginning with China… While the motives announced by Donald Trump were to include a component on ballistic missiles in any new agreement with Iran, the primary goal seems to be toppling the Islamic Republic, whose leaders reacted by threatening to close the Strait of Hormuz. It’s no surprise that oil prices have soared!

Mid-June: Trump – Kim Jong-un summit in Singapore. A non-event, with no real consequences on the denuclearisation of the Korean peninsula, but a resounding victory for Kim Jong-un, treated as an equal by the United States! Donald Trump seems to be more at ease in the company of tyrants than in that of democratically-elected leaders… but ever since, no progress has been recorded, which leaves two dangerous nuclear proliferation problem areas (Iran and Korea) completely open.

Early August: assassination attempt on N. Maduro, just re-elected president of Venezuela in May in a precipitated early presidential election, with a single round of voting… In fact, the successor of Hugo Chavez consolidated his grip over a country that was already worn out, grappling with an unprecedented economic crisis. Oil production in the country is in freefall, partly due to an economic blockade imposed by the United States. OPEC and Russia, without needing to reimpose quotas that are too restrictive, were thus able to take advantage of the increasing scarcity of the global oil offering and help oil prices maintain their upward momentum.

Mid-September: decision to impose additional tariffs of 10% on $200 billion worth of imports to the United States from China. The new tariffs will affect everyday products (refrigerators, furniture, television, toys, electronic products, etc.). The United States practically imports for $500 billion from China each year, and with the tariffs already in place, half of Chinese imports will be affected! And the new tariffs could reach 25% by the end of the year, driving the United States even deeper into an increasingly protectionist approach – in the short term at least, as American consumers will see great losses resulting from this policy in the long term: the price of cars in the United States, for example, should increase by nearly 10% simply because of the tariffs on steel and aluminium.

China seems ready to take harsh retaliatory measures which, this time, would include the export of American refined oil products and LNG to China, in addition to agricultural products.

Even though the U.S. House of Representatives could switch in the November elections, the Senate should remain Republican. And even if Donald Trump were forced to resign following the accumulation of scandals around him, his replacement by Vice President Mike Pence wouldn’t change the extremist political attitude of the Republicans in power for an additional two years.

But several factors could result in a period of calm for energy prices:

Oil and gas producers in the US, it seems, will be among the first victims of Donald Trump’s policies… but it would be excellent news for energy prices, especially in Europe!