THE TIMES THEY ARE A-CHANGIN’ – Iberian Singularity

Energy has been a daily topic of conversation in recent months. We at HES have been closely following all the developments to accompany our clients and help them weather the storm. In some of our previous publications we analysed the onset of the energy crisis after the “recovery” from the Covid-19 pandemic, pointing to Russia as the only global player in a position to alleviate the pressure on the markets at the time. Months later, we studied the impact that Russia would have on them were it to make use of its unique position to invade Ukraine.

After all, the West´s energy situation is looking bad, and the measures taken both at national and EU level do not seem to be sufficient. In this context, while most countries are proposing some relief measures (tax reductions, tariff freezes, direct subsidies for vulnerable households, etc.), Spain, together with Portugal, have opted for market intervention, and it seems that they have managed to get the European Commission to listen to their proposal after recognising the famous “Iberian singularity”.

Taking advantage of the exceptionally serious situation that the European Union is experiencing in political and energy terms, and in response to the pressure it is exerting on its citizens, Spain and Portugal have managed to get the European Commission to endorse (pending a formal approval) a proposal to intervene the energy market, something unheard of since the electricity market was first liberalized.

The Spanish and Portuguese governments are proposing to intervene the market by limiting the marginal cost of those electricity producers that use gas. Since these producers will have to purchase gas at market prices, they will need to be compensated for the difference in costs. The proposal of the Iberian governments is that this difference between the real cost and the intervention price should be reallocated to “non-marginal, non-emitting technologies that have internalised the windfalls derived from the rise in the price of natural gas”, i.e., renewables and nuclear. The principle of the agreement specified a limit of 50 €/MWh on average – starting at 40 €/MWh, the limit will be gradually increased – which will de facto limit the electricity price to around 150 €/MWh. 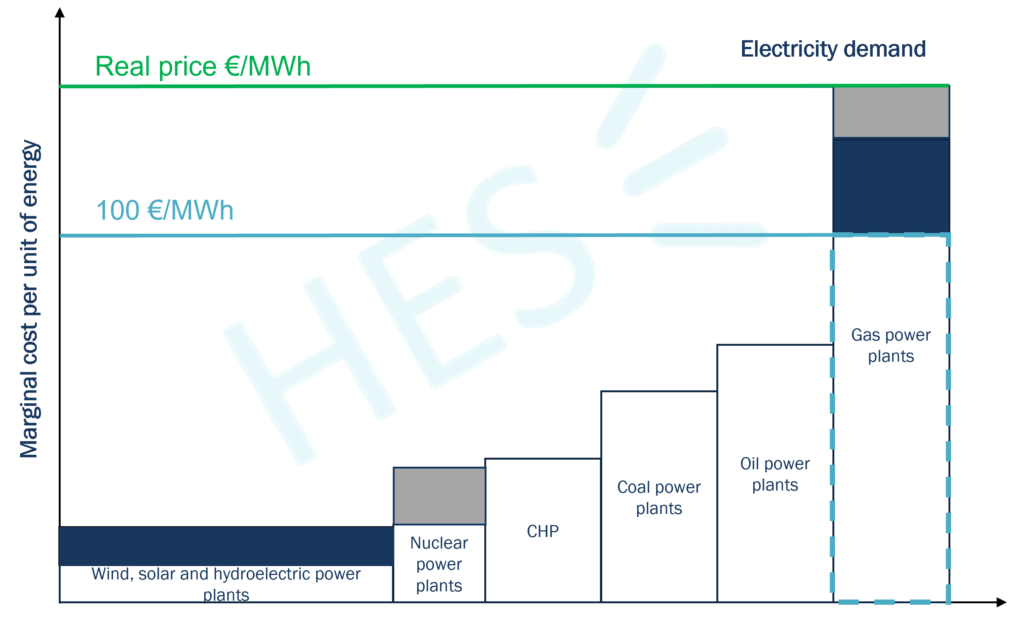 The impact of this measure on the market is obvious: following the announcement of a preliminary agreement with the European Commission, electricity futures for the third quarter of 2022 decreased from 220 €/MWh on 25 April to 150 €/MWh a few days later. The European Commission has indicated that electricity exports to France – after all, even though there is little capacity, there are interconnections – will be made at the same reference price than that of the Iberian Peninsula. Therefore, the French consumer will benefit from low prices, even if imports from Spain represent a minimal percentage of the French power demand.

While this measure seems sensible to protect consumers in the short term given the current crisis, it could end up having a negative impact in the medium and long term by sending the wrong market signals:

It should be clarified that this intervention of the Iberian market (with the resulting distortion of the single market) has been, on the one hand, requested by Spain and Portugal to be able to compensate consumers exposed market prices, given that the Iberian Peninsula lacks the means other countries have to freeze prices, as is the case of France and the bouclier tarifaire (tariff “shield”). On the other hand, the measure has been tolerated by the European Commission as the interconnections between the Iberian Peninsula and the rest of the European Union countries is very weak and the measure will hardly have any effect on other markets. After years of inaction and opposition on the side of different national and international actors, Spain´s interconnections barely account for 5% of its installed generation capacity, far below the 10% target the EU had set for 2020.

Although this proposal has yet to be finalised and officially approved (despite the European Commission having endorsed it, some technical details still need specifying), and, if it is finally approved, it will be applied on a temporary basis, it will mark a turning point for the energy markets, setting several important milestones:

In any case, any market intervention is always delicate. Let´s see how it all turns out…

[1] Note to readers, this article was published on 12th of May, one day before the Royal Decree was officially approved.