Draping themselves in environmentalist morality, Europe and its States have wasted an absolute fortune on reducing emissions (and primary energy), with appallingly lacklustre results: 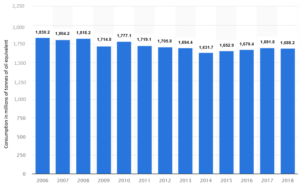 Today (post-Covid-19?), when the industry – and, consequently, its greenhouse gas emissions – came to a standstill, we were hastily told that the pandemic and its litany of restrictions would work in favour of environmental goals and that the birth of a greener world would follow suit. However, is this really the case? Let’s take a closer look at the big picture for France:

Not really signs of a world that has suddenly become greener… However, the beginning of an accelerated change has been promised, with a series of new measures for reviving the economy through green growth. Europe is promising €750 billion, France is giving a boost of €100 billion, €30 billion of which is dedicated to the ecological transition, Germany is going one step further with a plan worth €130 billion… When it rains, it pours!!

Apart from increasing public debt, will these colossal sums that Europe and the States have invested in recovery help them set back on green? Nothing could be less certain. A chronicle of an avoidable disaster:

The example set by the controversial French system of ESCs (Energy Savings Certificates) is a good illustration of this. An assessment mission[1], prompted by the Court of Auditors, discreetly highlighted ‘the existing gap between the communication given surrounding energy renovation work, […], and reality […] which is far more ’.

Thus, for the ESCs – as with a number of similar systems – ‘green’ plays more of a role in the intention of subsidies and the accomodating look of communicators than in the actual result of measures financed at great expense. Accordingly, in 2014, the authors of the ESC inspection report even ventured to write that ‘having the State encourage, through the ESC system, operations which are financially very unfavourable […] may stimulate debate,’ a debate that is still struggling to happen in 2020, despite the fact that the ADEME expert report has rated the inefficiency of the ESC system at 53%. A gradual loss summarised in a laconic graphic: 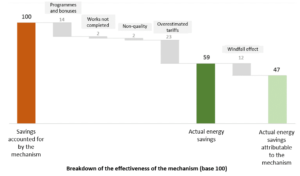 This result does not discourage the State which, as part of the economic recovery plan, intends to invest an additional €7 billion in this same system (slightly amended all the same with the commendable intention of limiting fraud). In fact, to restart growth, even more subsidies, aids and capacities will be poured into those energies deemed green…

…All at the risk of unbalancing the electricity system and generating negative prices or adverse side effects (such as the need to maintain coal-fired power plants for frequency control).

For that matter, upon closer look, the mistake has already been made (see our article on the misguided actions of the EnergieWende). The result: lignite (brown coal) devouring villages and still roaring along at full speed in Germany while the two brand-new and ultra-efficient gas power plants of Irsching 4 and 5 are mothballed.

While the Covid-19 crisis has offered a respite in the growth of primary energy consumption and emissions, it has also thrown the security of energy supply and electricity grid security issue into the spotlight. This is a fear which, by propelling 2020 capacity certificates to €53,000 per MWh, benefits diesel generators more than renewable energy sources. Furthermore, in the end, the consumer ends up paying the bill.

One billion Euros in battery subsidies has already been announced, which we’re told will solve the problem. Or will it shift the problem elsewhere? Leaving aside the time necessary for rolling out the batteries and integrating them into the electricity system, we are closer to the State planning here than to the EU’s much-vaunted market liberalisation.

After all, if renewable energies were that much cheaper and battery technology so efficient, there would be no need to subsidise the sector so massively. QED…

In fact, battery systems still suffer from limitations that don’t allow them to cover all of the system’s needs in terms of flexibility: contrary to misleading appearances, not all MWhs are generated equals, and the capacity mechanism trajectory alone, given that it was established at State level, cannot compensate for an excessive or skewed orbit at European level.

Also, what about the management of other non-renewable resources, such as the rare metals that are factored into the composition of batteries? What about batteries’ end of life and their recycling? As for wind turbines, solutions will have to be thought of after the development .

Meanwhile, a promising, more sustainable hydrogen sector would have been slow to see so many fairy godmothers of Europe leaning over its cradle… But then, …

On 9 September, economy joined forces with ecology, recovery partnered with transition and, through the voice of their respective Ministers, they announced a hydrogen strategy: another €7 billion there for recovery, together with some grandiose targets: 6.5 GW of electrolysers installed by 2030: absolutely mammoth! Here, once again, we’re getting a taste of déjà vu with this new subsidies’ policy involving injection into the natural gas network and traceability.

It was not so long ago that another verdant and virtuous sector received such respect and reward: biogas, in which a system paying up to 10 times the price of gas and increasing the TICGN [Domestic Consumption Tax on Natural Gas] triggered a green rush towards biomethane projects and their guarantees of origin.

As of 2021, this would cost the State over €1 billion annually, which explains why the Government is now looking to turn off the tap (especially  before European guarantees from other countries can be substituted for the French GOs, therefore making them eligible for the same benefits…).

This has been accomplished through the French 2020 Finance Law[2], which removes the aforementioned TICGN exemption from biogas starting on 1st January 2021. However, this move risks causing the biomethane sector in France to come to an abrupt halt. We can certainly bet that  investors’ retreat will be as swift as their assault. Yet another example of these ‘water hammer’ incentive policies which already proved harmful in the development of solar energy at the end of the 2000s, when the feed-in tariffs were revised…

In every matter we should mind the end

It’s as if the dogma wanted to systematically create a well of subsidies, exemptions and one-sided incentives, hoping then to escape it by any means necessary a few years — and a lot of wasted effort — later…

Far be it from us to question the environmental direction of growth. Nevertheless, a little more continuity and simplification across the systems would make it possible to avoid some of the pitfalls that have punctuated energy policies in recent years (enormous additional costs, windfall effects, adverse results, abrupt halts within sectors, massive fraud, etc.).

In the same way in which an electricity market had to ultimately correct its ‘energy only’ approach, an adaptation may be found in the EU’s energy policy, as well as an optimisation that can be implemented in order to Spend Less (public money) and achieve greater results in terms of the environment, energy security, and the long term. Let´s hope that the Covid-19 crisis will, above all, present an opportunity for Europe (and its States) to (finally) make the right choices for a more pragmatic – and less dogmatic – energy transition.